Medical malpractice in Norway: frequency and distribution of disciplinary actions for medical doctors 2011–2018 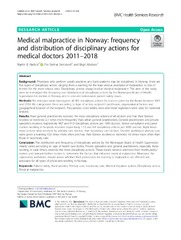 Background: Physicians who perform unsafe practices and harm patients may be disciplined. In Norway, there are five types of disciplinary action, ranging from a warning for the least serious examples of malpractice to loss of licence for the most serious ones. Disciplinary actions always involve medical malpractice. The aims of this study were to investigate the frequency and distribution of disciplinary actions by the Norwegian Board of Health Supervision for doctors in Norway and to uncover nation-wide patient safety issues.

Methods: We retrospectively investigated all 953 disciplinary actions for doctors given by the Board between 2011 and 2018. We categorized these according to type of action, recipient’s profession, organizational factors and geographical location of the recipient. Frequencies, cross tables, rates and linear regression were used for statistical analysis.

Conclusion: The distribution and frequency of disciplinary actions by the Norwegian Board of Health Supervision clearly varied according to type of health care facility. Private specialists and general practitioners, especially those working in rural clinics, received the most disciplinary actions. These results deserve attention from health policy-makers and warrant further studies to determine the factors that influence medical malpractice. Moreover, the supervisory authorities should assess whether their procedures for reacting to malpractice are efficient and adequate for all types of physicians working in Norway.