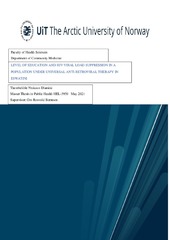 Introduction: HIV/AIDS continues to be amongst the leading causes of morbidity and mortality in Sub-Saharan Africa. There is no approved cure for HIV, but the disease can be managed using Anti-Retroviral Therapy (ART). If drug adherence of about 95% is achieved, odds for a better clinical outcome increase. The level of education as a marker for many socio- economic status indicators has an impact on an individual ́s health. If a country is devasted by the virus, the nation faces both macro and micro economic effects. HIV is the leading cause of reduced disability adjusted life years in eSwatini, and the country has the highest HIV prevalence in the world. However, through donor agencies like United States President Emergency Plan for AIDS Relief (PEPFAR) and Global Fund, eSwatini can provide free ART.

Purpose: To determine if the level of education lowers the risk for VLS failure in eSwatini to a population that has universal access to ART.

Material and Methods: The present study included a representative sample of 2025 HIV positive participants with traces of ART in blood-samples who have used ART for at least 6 months aged 15 years or older from the SHIMS 2 study in eSwatini 2016-2017. This cross- sectional survey includes data from blood samples analyses Viral Load Suppression (VLS) and Viral Load Count VLC) and self-administered questionnaires. Multi-variate logistic regression models were used to estimate the un-biased association between level of education and VLS- Failure.

Conclusion: This population-based survey is, to the best of our knowledge, the first study to provide data on the association of level of education and VLS-Failure in eSwatini in a population with blood traces of ART. This study reveals that people who have completed tertiary education have lower risks of VLS-Failure.