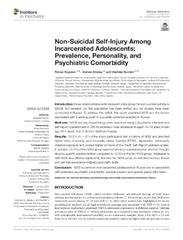 Introduction: Incarcerated adolescents represent a risk group for non-suicidal self-injury (NSSI), but research on this population has been limited and no studies have been conducted in Russia. To address this deficit, this study examined NSSI and the factors associated with it among youth in a juvenile correctional facility in Russia.

Results: 18.2% (N = 67) of the study participants had a history of NSSI and also had higher rates of anxiety, post-traumatic stress disorder (PTSD), depression, community violence exposure and scored higher on most of the Youth Self-Report problem scales. In addition, 31.3% of the NSSI group reported previous suicidal ideation and had thought about a specific suicide method compared to 12.0% in the No-NSSI group. Adolescents with NSSI also differed significantly from the No-NSSI group on self-directedness (lower) and self-transcendence (higher) personality traits.

Conclusion: NSSI is common in incarcerated adolescents in Russia and is associated with extensive psychiatric comorbidity, suicidal ideation and specific personality traits.