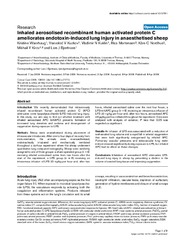 Introduction We recently demonstrated that intravenously infused recombinant human activated protein C (APC) attenuates ovine lipopolysaccharide (LPS)-induced lung injury. In this study, our aim was to find out whether treatment with inhaled aerosolised APC (inhAPC) prevents formation of increased lung densities and oedema and derangement of oxygenation during exposure to LPS.
Methods: Sheep were anaesthetised during placement of intravascular introducers. After one to four days of recovery from instrumentation, the animals were re-anaesthetised, endotracheally intubated and mechanically ventilated throughout a six-hour experiment where the sheep underwent quantitative lung computed tomography. Sheep were randomly assigned to one of three groups: a sham-operated group (n = 8) receiving inhaled aerosolised saline from two hours after the start of the experiment; a LPS group (n = 8) receiving an intravenous infusion of LPS 20 ng/kg per hour and, after two hours, inhaled aerosolised saline over the next four hours; a LPS+inhAPC group (n = 8) receiving an intravenous infusion of LPS 20 ng/kg per hour and, after two hours, aerosolised APC 48 µg/kg per hour inhaled throughout the experiment. Data were analysed with analysis of variance; P less than 0.05 was regarded as significant.
Results: An infusion of LPS was associated with a reduction of well-aerated lung volume and a rapid fall in arterial oxygenation that were both significantly antagonised by inhaled APC. Pulmonary vascular pressures and extravascular lung water index increased significantly during exposure to LPS, but inhaled APC had no effect on these changes.
Conclusions: Inhalation of aerosolised APC attenuates LPSinduced lung injury in sheep by preventing a decline in the volume of aerated lung tissue and improving oxygenation.