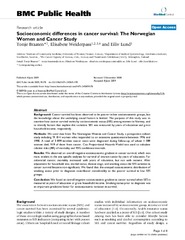 Background: Cancer survival has been observed to be poorer in low socioeconomic groups, but the knowledge about the underlying causal factors is limited. The purpose of this study was to examine how cancer survival varies by socioeconomic status (SES) among women in Norway, and to identify factors that explain this variation. SES was measured by years of education and gross household income, respectively.
Methods: We used data from The Norwegian Women and Cancer Study, a prospective cohort study including 91 814 women who responded to an extensive questionnaire between 1996 and 1998. A total of 3 899 incident cancer cases were diagnosed during follow-up, of whom 1 089 women died, 919 of them from cancer. Cox Proportional Hazards Model was used to calculate relative risks (RR) of mortality and 95% confidence intervals.
Results: We observed an overall negative socioeconomic gradient in cancer survival, which was most evident in the site specific analyses for survival of ovarian cancer by years of education. For colorectal cancer, mortality increased with years of education, but not with income. After adjustment for household size, marital status, disease stage, and smoking status the SES variation in cancer survival became non-significant. We found that the unequal socioeconomic distribution of smoking status prior to diagnosis contributed considerably to the poorer survival in low SES groups.
Conclusion: We found an overall negative socioeconomic gradient in cancer survival when SES is measured as years of education or gross household income. Smoking status prior to diagnosis was an important predictive factor for socioeconomic variation in survival.