Parathyroid hormone, but not vitamin D, is associated with the metabolic syndrome in morbidly obese women and men : a cross-sectional study 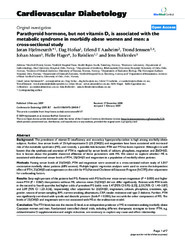 Background: The prevalence of vitamin D insufficiency and secondary hyperparathyroidism is high among morbidly obese subjects. Further, low serum levels of 25-hydroxyvitamin D (25 [OH]D) and magnesium have been associated with increased risk of the metabolic syndrome (MS), and recently, a possible link between PTH and MS has been reported. Although it is well known that the synthesis and secretion of PTH is regulated by serum levels of calcium, phosphate, magnesium and 25(OH)D, less is known about the possible clustered affiliation of these parameters with MS. We aimed to explore whether MS is associated with abnormal serum levels of PTH, 25(OH)D and magnesium in a population of morbidly obese patients.
Methods: Fasting serum levels of 25(OH)D, PTH and magnesium were assessed in a cross-sectional cohort study of 1,017 consecutive morbidly obese patients (68% women). Multiple logistic regression analyses were used to assess the independent effect of PTH, 25(OH)D and magnesium on the odds for MS (National Cholesterol Education Program [NCEP]) after adjustment for confounding factors.
Results: Sixty-eight percent of the patients had MS. Patients with MS had lower mean serum magnesium (P < 0.001) and higher mean PTH (P = 0.067) than patients without MS, whereas mean 25(OH)D did not differ significantly. Patients with PTH levels in the second to fourth quartiles had higher odds of prevalent MS (odds ratio 1.47 [95% CI 0.92–2.35], 2.33 [95% CI 1.40–3.87] and 2.09 [95% CI 1.23–3.56], respectively), after adjustment for 25(OH)D, magnesium, calcium, phosphate, creatinine, age, gender, season of serum sampling, BMI, current smoking, albuminuria, CRP, insulin resistance and type 2 diabetes. Further, PTH was significantly correlated with systolic and diastolic pressure (both P < 0.001), but not with the other components of MS. The levels of 25(OH)D and magnesium were not associated with MS in the multivariate model.
Conclusion: The PTH level, but not the vitamin D level, is an independent predictor of MS in treatment seeking morbidly obese Caucasian women and men. Randomized controlled clinical trials, including different therapeutic strategies to lower PTH, e.g. calcium/vitamin D supplementation and weight reduction, are necessary to explore any cause-and-effect relationship.