Incidence of hospital referred head injuries in Norway : a population based survey from the Stavanger region 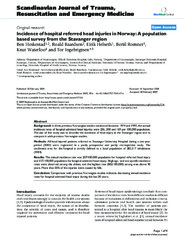 Background: In three previous Norwegian studies conducted between 1974 and 1993, the annual incidence rates of hospital admitted head injuries were 236, 200 and 169 per 100,000 population. The aim of this study was to describe the incidence of head injury in the Stavanger region and to compare it with previous Norwegian studies.
Methods: All head injured patients referred to Stavanger University Hospital during a one-year period (2003) were registered in a partly prospective and partly retrospective study. The catchment area for the hospital is strictly defined to a local population of 283,317 inhabitants (2003).
Results: The annual incidence rate was 207/100,000 population for hospital referred head injury and 157/100,000 population for hospital admitted head injury. High age- and sex specific incidence rates were observed among the oldest, and the highest rate (882/100,000) among men above 90 years. More than 50% of the injuries were caused by falls.
Conclusion: Comparison with previous Norwegian studies indicates decreasing annual incidence rates for hospital admitted head injury during the last 30 years.