Discovering gender and inflection. A view from Icelandic 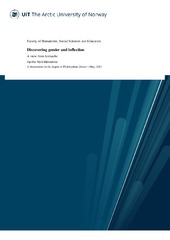 thesis.pdf (2.527Mb)
Thesis introduction, paper I and II (PDF)
thesis_entire.pdf (3.059Mb)
Entire thesis in one comprehensive file (PDF)
File(s) with restricted access are under embargo until 2026-09-20

In this dissertation, I investigate the nature of generalizations in grammatical gender and inflectional morphology from a learning perspective. Cross-linguistic differences in children’s learning trajectories have been at the forefront of research on the acquisition of grammatical gender. Transparency has been argued to be predictive of children’s behavior in gender acquisition (Slobin, 1977). Hitherto, however, it has been unclear what it means for a gender system to be either transparent or opaque to the child learner. I argue that in order to get to the root of the cause, a theory of grammatical gender acquisition must explain the conditions under which children generalize in gender assignment – and when these conditions are not met.

In a series of corpus studies that approximate a child’s lexical experience in gender acquisition in Icelandic, I formulate predictions for children’s behavior using two contrasting models of productivity, Baayen’s P and P* metrics (1989; 1991; 1993) and Yang’s Tolerance Principle (2005; 2016). These predictions were put to the test in an elicited production task on children and adults with two conditions: Productive and unproductive. I argue that the empirical results demonstrate that children and adults draw a categorical distinction between productive and unproductive processes in gender assignment in Icelandic. I argue that cross-linguistic differences in gender acquisition reflect a learning process that is guided by the search for productive patterns.

In two subsequent studies, using the same corpus-based and experimental methods, I investigate how knowledge of gender facilitates the induction of other inflectional forms or vice versa, using plural formation in Icelandic as a test case. Noun pluralization in Icelandic crosscuts both gender and inflection classes, which raises the question of how children can extract the relevant generalizations given syncretism both within and across the inflectional paradigm. I demonstrate how children and adults were at a loss to pluralize nouns that they were unable to assign gender to. In other words, productivity in gender assignment correlates with productivity in plural formation. Since knowledge of gender is contingent on the knowledge of productive nominative singular forms, I propose that gender may be a developmental prerequisite for the acquisition of plural formation in Icelandic due to the statistical primacy of singular forms in the input.

I discuss the theoretical implications of the empirical findings, both for language acquisition and for linguistic theory. I propose that an understanding of children’s discovery procedure in acquisition may offer solutions to otherwise intractable problems in linguistic theory. I further propose that learning considerations may shed light on the nature of the variation attested in heritage grammars. In a longitudinal corpus case study, I study how generalizations about gender assignment may undergo change as the result of attrition. I argue that the nature of the changes attested in the corpus as a function of time suggest difficulties with lexical access and retrieval, rather than a systematic re-analysis of the gender system, although the non-target forms are not entirely unconstrained.