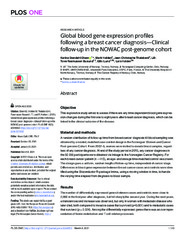 Objective - This explorative study aimed to assess if there are any time-dependent blood gene expression changes during the first one to eight years after breast cancer diagnosis, which can be linked to the clinical outcome of the disease.

Material and methods - A random distribution of follow-up time from breast cancer diagnosis till blood sampling was obtained by a nested, matched case-control design in the Norwegian Women and Cancer Post-genome Cohort. From 2002–5, women were invited to donate blood samples, regardless of any cancer diagnosis. At end of the study period in 2015, any cancer diagnoses in the 50 000 participants were obtained via linkage to the Norwegian Cancer Registry. For each breast cancer patient (n = 415), an age- and storage time-matched control was drawn. The design gave a uniform, random length of follow-up time, independent of cancer stage. Differences in blood gene expression between breast cancer cases and controls were identified using the Bioconductor R-package limma, using a moving window in time, to handle the varying time elapsed from diagnosis to blood sample.

Results - The number of differentially expressed genes between cases and controls were close to 2,000 in the first year after diagnosis, but fell sharply the second year. During the next years, a transient second increase was observed, but only in women with metastatic disease who later died, both compared to invasive cases that survived (p<0,001) and to metastatic cases that survived (p = 0.024). Among the differentially expressed genes there was an overrepresentation of heme metabolism and T cell-related processes.

Conclusion - This explorative analysis identified changing trajectories in the years after diagnosis, depending on clinical stage. Hypothetically, this could represent the escape of the metastatic cancer from the immune system.