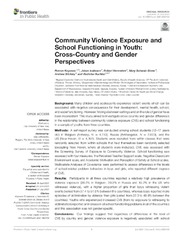 Background: Many children and adolescents experience violent events which can be associated with negative consequences for their development, mental health, school, and social functioning. However, findings between settings and on the role of gender have been inconsistent. This study aimed to investigate cross-country and gender differences in the relationship between community violence exposure (CVE) and school functioning in a sample of youths from three countries.

Methods: A self-report survey was conducted among school students (12–17 years old) in Belgium (Antwerp, N = 4,743), Russia (Arkhangelsk, N = 2,823), and the US (New Haven, N = 4,101). Students were recruited from within classes that were randomly selected from within schools that had themselves been randomly selected (excepting New Haven, where all students were included). CVE was assessed with the Screening Survey of Exposure to Community Violence. School functioning was assessed with four measures: the Perceived Teacher Support scale, Negative Classroom Environment scale, and Academic Motivation and Perception of Safety at School scales. Multivariate Analyses of Covariance were performed to assess differences in the levels of school-related problem behaviors in boys and girls, who reported different degrees of CVE.

Results: Participants in all three countries reported a relatively high prevalence of violence exposure (36.2% in Belgium, 39.3% in Russia and 45.2% in the US who witnessed violence), with a higher proportion of girls than boys witnessing violent events (varied from 37.4 to 51.6% between the countries), whereas boys reported more episodes of victimization by violence than girls (varied from 32.3 to 49.9% between the countries). Youths who experienced increased CVE (from no exposure to witnessing to victimization) reported an increase in all school functioning problems in all of the countries and this association was not gender-specific.

Conclusions: Our findings suggest that regardless of differences in the level of CVE by country and gender, violence exposure is negatively associated with school functioning across countries. Nonetheless, even though reactions to community violence among adolescents may be expressed in a similar fashion, cross-country differences in social support systems should also be taken into account in order to provide culturally sensitive treatment modalities.