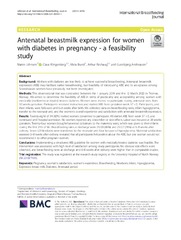 Background - Mothers with diabetes are less likely to achieve successful breastfeeding. Antenatal breastmilk expression (ABE) may facilitate earlier breastfeeding, but feasibility of introducing ABE and its acceptance among Scandinavian women have previously not been investigated.

Methods - This observational trial was conducted between the 1 January 2019 and the 12 March 2020 in Tromsø, Norway. We aimed to determine the feasibility of ABE in terms of practicality and acceptability among women with medically (metformin or insulin) treated diabetes. Women were invited to participate during antenatal visits from 32 weeks gestation. Participants received instruction and started ABE from gestation week 37 + 0. Participants, and their infants, were followed until 6–8 weeks after birth. We collected data on breastfeeding rates, infant hypoglycemia, transfer to the neonatal unit, and the women’s overall experience and satisfaction with antenatal breastmilk expression.

Results - Twenty-eight of 34 (82%) invited women consented to participate. All started ABE from week 37 + 0, and continued until hospital admission. No women reported any discomfort or side effects. Labor was induced at 38 weeks gestation. Twenty-four women brought harvested colostrum to the maternity ward, which was given to their infants during the first 24 h of life. Breastfeeding rates at discharge were 24/28 (86%) and 21/27 (78%) at 6–8 weeks after delivery. Seven (25%) infants were transferred to the neonatal unit; four because of hypoglycemia. Maternal satisfaction assessed 6–8 weeks after delivery revealed that all participants felt positive about the ABE, but one woman would not recommend it to other pregnant women.

Conclusions - Implementing a structured ABE guideline for women with medically treated diabetes was feasible. The intervention was associated with high level of satisfaction among study participants. No obvious side effects were observed, and breastfeeding rates at discharge and 6–8 weeks after delivery were higher than in comparable studies.