Impact of respiratory symptoms and oxygen saturation on the risk of incident venous thromboembolism-the Tromsø study. 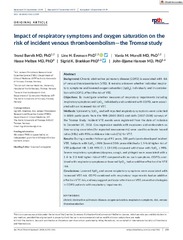 Objectives: To investigate whether measures of respiratory impairments including respiratory symptoms and SpO2, individually and combined with COPD, were associated with an increased risk of VTE.

Methods: Spirometry, SpO2, and self-reported respiratory symptoms were collected in 8686 participants from the fifth (2001-2002) and sixth (2007-2008) surveys of the Tromsø Study. Incident VTE events were registered from the date of inclusion to December 31, 2016. Cox regression models with exposures and confounders as time-varying covariates (for repeated measurements) were used to estimate hazard ratios (HRs) with 95% confidence intervals (CIs) for VTE.

Results: During a median follow-up of 9.1 years, 330 participants developed incident VTE. Subjects with SpO2 ≤ 96% (lowest 20th percentile) had a 1.5-fold higher risk of VTE (adjusted HR, 1.48; 95% CI, 1.13-1.93) compared with those with SpO2 ≥ 98%. Severe respiratory symptoms (dyspnea, cough, and phlegm) were associated with a 1.4- to 2.0-fold higher risk of VTE compared with no such symptoms. COPD, combined with respiratory symptoms or lowered SpO2, had an additive effect on the VTE risk.