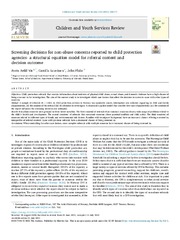 Objectives: Child protection referrals that contain information about incidents of physical child abuse, sexual abuse, and domestic violence have a high chance of being screened in for investigation. The aim of the current study is to investigate which case factors that affect the decision to screen-in cases with other types of concerns.

Method: A sample of referrals (N = 1365) to child protection services in Norway was randomly drawn. Information was collected regarding (i) child and family characteristics, (ii) the content of the referral (iii) the decision to investigate. A structural equation model that describe how case characteristics and the contents of the report influence the screening decision was estimated.

Results: Non abuse-concerns were grouped in three latent variables. The first consisted of referrals that contained concerns about a wide range of problems related to the child’s health and development. The second consisted of referrals that contained concerns about parental conflicts and child safety. The third consisted of concerns related to different types of family and environmental risk factors. Families with immigrant background have an increased chance of being screened-in, irrespective of referral content. Cases with previous referrals have a decreased chance of being screened-in.

Conclusions: When controlling for other case factors, more complex referrals with multiple concerns have increased chance of being screened in.