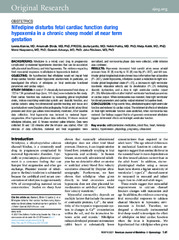 Background: Nifedipine is a widely used drug in pregnancies complicated by maternal hypertensive disorders that can be associated with placental insufficiency and fetal hypoxemia. The evidence regarding fetal myocardial responses to nifedipine in hypoxemia is limited.

Objective: We hypothesized that nifedipine would not impair fetal sheep cardiac function under hypoxemic environment. In particular, we investigated the effects of nifedipine on fetal ventricular functional parameters and cardiac output.