Conflict and order in Svalbard waters 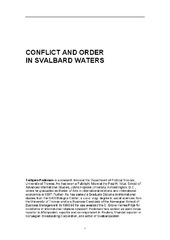 This dissertation examines processes that induce conflict and order in the maritime areas adjacent to the Svalbard archipelago, where Norway’s sovereign rights as coastal state are contested. The first process is the ambiguous causal interplay of international politics and international law: After decades of debate, the parties to it remain reluctant to involve disinterested international third parties to settle their legal differences. Despite the legal character of the dispute, it endures as a political wrangle, as envisaged in a world of Realpolitik. Still, international law is not merely epiphenomenal to politics. International legal rules are cementing Norway’s right to establish and exercise jurisdiction in the zones, hence affecting international politics. The cementing effect of law on international relations goes beyond what was intended at the time of its adoption. The second process, the causal exchanges between the international system and a state’s foreign policy, is paradoxical: Norway, by its assertive exercise of jurisdiction and diplomatic efforts to muster international support, nourishes systemic conditions it in turn is constrained by. In effect, the policies of Norway cause changes in the international system that affect the policies of Norway. Attracting attention to the Svalbard issue has not improved Norway’s systemic conditions as aspired for, but rather spurred a more coordinated opposition against the claimed exclusive rights of Norway in the waters off of the former terra nullius.