Russia’s Blockade in the Sea of Azov: A Call for Relief Shipments for Mariupol 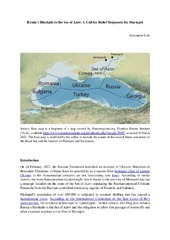 On 24 February 2022, the Russian Federation launched an invasion of Ukraine. Hundreds of thousands of Ukrainian civilians have no possibility to evacuate from besieged cities of eastern Ukraine as the humanitarian corridors are not functioning (see here). According to media reports, the worst humanitarian situation right now is found in the port city of Mariupol which has a strategic location on the coast of the Sea of Azov separating the Russian-annexed Crimean Peninsula from the Russian-controlled breakaway regions of Donetsk and Luhansk.

Mariupol’s population of over 400 000 is subjected to constant shelling that has caused a humanitarian crisis. According to the International Committee of the Red Cross (ICRC) spokesperson, the situation in Mariupol is ‘apocalyptic’. In this context, this blog post debates Russia’s blockade in the Sea of Azov and the obligation to allow free passage of foodstuffs and other essential supplies to the Port of Mariupol.

Blog post in EJIL:Talk! - Blog of the European Journal of International Law.

Lott A. Russia’s Blockade in the Sea of Azov: A Call for Relief Shipments for Mariupol. EJIL:Talk!. 2022