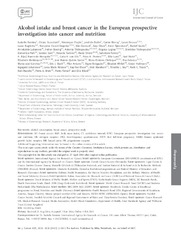 Alcohol intake has been associated to breast cancer in pre and postmenopausal women; however results are inconclusive regarding tumor hormonal receptor status, and potential modifying factors like age at start drinking. Therefore, we investigated the relation between alcohol intake and the risk of breast cancer using prospective observational data from the European Prospective Investigation into Cancer and Nutrition (EPIC). Up to 334,850 women, aged 35–70 years at baseline, were recruited in ten European countries and followed up an average of 11 years. Alcohol intake at baseline and average lifetime alcohol intake were calculated from country-specific dietary and lifestyle questionnaires. The study outcomes were the Hazard ratios (HR) of developing breast cancer according to hormonal receptor status. During 3,670,439 person-years, 11,576 incident breast cancer cases were diagnosed. Alcohol intake was significantly related to breast cancer risk, for each 10 g/day increase in alcohol intake the HR increased by 4.2% (95% CI: 2.7–5.8%). Taking 0 to 5 g/day as reference, alcohol intake of >5 to 15 g/day was related to a 5.9% increase in breast cancer risk (95% CI: 1–11%). Significant increasing trends were observed between alcohol intake and ER1/ PR1, ER2/PR2, HER22 and ER2/PR2HER22 tumors. Breast cancer risk was stronger among women who started drinking prior to first full-time pregnancy. Overall, our results confirm the association between alcohol intake and both hormone receptor positive and hormone receptor negative breast tumors, suggesting that timing of exposure to alcohol drinking may affect the risk. Therefore, women should be advised to control their alcohol consumption.

Although it is now established that alcohol consumption increases breast cancer risk, many questions remain. Using a prospective study design with 11,576 incident breast cancer cases across 10 European countries, the authors confirmed the increased risk of alcohol on breast cancer development. They further show that women who started drinking before their first full-term pregnancy have a higher risk than women who started afterwards. These effects were observed in hormone-receptor positive and –negative tumors pointing to non-hormonal pathways that need to be further investigated.