Validity of self-reported educational level in the Tromsø Study 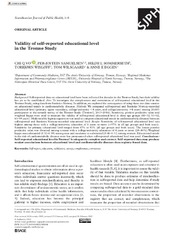