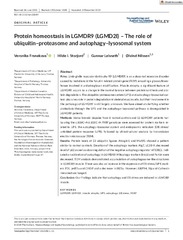 Aims: Limb-girdle muscular dystrophy R9 (LGMDR9) is an autosomal recessive disorder caused by mutations in the fukutin-related protein gene (FKRP), encoding a glycosyltransferase involved in α-dystroglycan modification. Muscle atrophy, a significant feature of LGMDR9, occurs by a change in the normal balance between protein synthesis and protein degradation. The ubiquitin–proteasome system (UPS) and autophagy–lysosomal system play a key role in protein degradation in skeletal muscle cells, but their involvement in the pathology of LGMDR9 is still largely unknown. We have aimed at clarifying whether proteolysis through the UPS and the autophagy–lysosomal pathway is dysregulated in LGMDR9 patients.

Results: Protein levels of E3 ubiquitin ligases Atrogin-1 and MuRF1 showed a pattern similar to normal controls. Elevation of the autophagy markers Atg7, LC3B-II, decreased level of p62 as well as downregulation of the negative autophagy regulator mTORC1, indicated an activation of autophagy in LGMDR9. Mitophagy markers Bnip3 and Parkin were decreased. TEM analysis demonstrated accumulation of autophagosome-like structures in LGMDR9 muscle. There was also an increase in the expression of ER stress/UPR markers PDI, peIF2α and CHOP and a decrease in IRE1α. However, GRP94, Bip and Calnexin remained unchanged.

Conclusion: Our findings indicate that autophagy and ER stress are induced in LGMDR9 muscle.