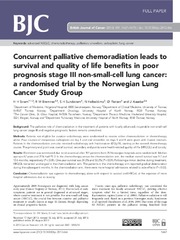 Methods: Patients not eligible for curative radiotherapy were randomised to receive either chemoradiation or chemotherapy alone. Four courses of intravenous carboplatin on day 1 and oral vinorelbin on days 1 and 8 were given with 3-week intervals. Patients in the chemoradiation arm also received radiotherapy with fractionation 42 Gy/15, starting at the second chemotherapy course. The primary end point was overall survival; secondary end points were health-related quality of life (HRQOL) and toxicity.

Conclusion: Chemoradiation was superior to chemotherapy alone with respect to survival and HRQoL at the expense of more hospital admissions due to toxicity.