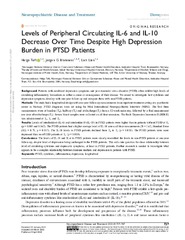 Background: Patients with combined depression symptoms and post-traumatic stress disorder (PTSD) often exhibit high levels of circulating inflammatory biomarkers as either a cause or consequence of their disease. We aimed to investigate how cytokines and depression symptoms develop with one-year follow-up and compare them with non-PTSD patients.

Methods: The study had a longitudinal design with one-year follow-up measurements in an inpatient treatment setting at a psychiatric center in Norway. PTSD diagnoses were set using the Mini International Neuropsychiatric Interview (MINI). The first three measurements were at baseline (T0), halfway (T1) and at discharge (T2) from a 12-week main stay, followed by a final measurement one year after discharge (T3). Serum blood samples were collected on all four occasions. The Beck Depression Inventory-II (BDI-II) was administered at T0, T2 and T3.