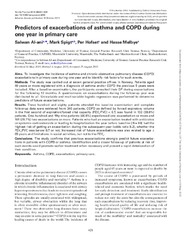 Aims. To investigate the incidence of asthma and chronic obstructive pulmonary disease (COPD) exacerbations in primary care during one year and to identify risk factors for such events.

Methods. The study was carried out at seven general practice offices in Norway. Patients aged 40 years or more registered with a diagnosis of asthma and/or COPD the previous 5 years were included. After a baseline examination, the participants consulted their GP during exacerbations for the following 12 months. A questionnaire on exacerbations during the follow-up year was distributed to all. Univariable and multivariable logistic regression was performed to determine predictors of future exacerbations.

Results. Three hundred and eighty patients attended the baseline examination and complete follow-up data were retrieved from 340 patients. COPD as defined by forced expiratory volume in the first second of expiration/forced vital capacity (FEV1 /FVC) < 0.7, was found in 132 (38.8%) patients. One hundred and fifty-nine patients (46.8%) experienced one exacerbation or more and 101 (29.7%) two exacerbations or more. Patients who had an exacerbation treated with antibiotics or systemic corticosteroids or leading to hospitalization the year before baseline (N = 88) had the highest risk of getting an exacerbation during the subsequent year (odds ratio 9.2), whether the FEV1 /FVC was below 0.7 or not. Increased risk of future exacerbations was also related to age ≥ 65 years and limitations in social activities, but not to the FEV1 .

Conclusions. The study confirms that previous exacerbations strongly predict future exacerbations in patients with COPD or asthma. Identification and a closer follow-up of patients at risk of such events could promote earlier treatment when necessary and prevent a rapid deterioration of their condition.