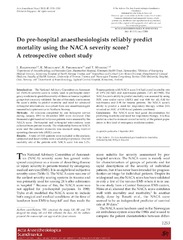 Introduction: The National Advisory Committee on Aeronautics’ (NACA) severity score is widely used in pre-hospital emergency medicine to grade the severity of illness or trauma in patient groups but is scarcely validated. The aim of this study was to assess the score’s ability to predict mortality and need for advanced in-hospital interventions in a cohort from one anaesthesiologistmanned helicopter service in Northern Norway.

Methods: All missions completed by one helicopter service during January 1999 to December 2009 were reviewed. One thousand eight hundred forty-one patients were assessed by the NACA score. Pre-hospital and in-hospital interventions were collected from patient records. The relationship between NACA score and the outcome measures was assessed using receiver operating characteristic (ROC) curves.

Results: A total of 1533 patients were included in the analysis; uninjured and dead victims were excluded per protocol. Overall mortality rate of the patients with NACA score 1–6 was 5.2%. Trauma patients with NACA score 1–6 had overall mortality rate of 1.9% (12/625) and non-trauma patients 7.4% (67/908). The NACA score’s ability to predict mortality was assessed by using ROC area under curve (AUC) and was 0.86 for all, 0.82 for non-trauma and 0.98 for trauma patients. The NACA score’s ability to predict a need for respiratory therapy within 24 h revealed an AUC of 0.90 for all patients combined.

Conclusion: The NACA score had good discrimination for predicting mortality and need for respiratory therapy. It is thus useful as a tool to measure overall severity of the patient population in this kind of emergency medicine system.