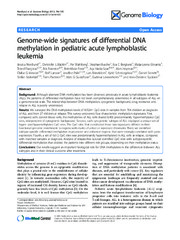 Background: Although aberrant DNA methylation has been observed previously in acute lymphoblastic leukemia (ALL), the patterns of differential methylation have not been comprehensively determined in all subtypes of ALL on a genome-wide scale. The relationship between DNA methylation, cytogenetic background, drug resistance and relapse in ALL is poorly understood.

Results: We surveyed the DNA methylation levels of 435,941 CpG sites in samples from 764 children at diagnosis of ALL and from 27 children at relapse. This survey uncovered four characteristic methylation signatures. First, compared with control blood cells, the methylomes of ALL cells shared 9,406 predominantly hypermethylated CpG sites, independent of cytogenetic background. Second, each cytogenetic subtype of ALL displayed a unique set of hyper- and hypomethylated CpG sites. The CpG sites that constituted these two signatures differed in their functional genomic enrichment to regions with marks of active or repressed chromatin. Third, we identified subtype-specific differential methylation in promoter and enhancer regions that were strongly correlated with gene expression. Fourth, a set of 6,612 CpG sites was predominantly hypermethylated in ALL cells at relapse, compared with matched samples at diagnosis. Analysis of relapse-free survival identified CpG sites with subtype-specific differential methylation that divided the patients into different risk groups, depending on their methylation status.

Conclusions: Our results suggest an important biological role for DNA methylation in the differences between ALL subtypes and in their clinical outcome after treatment.