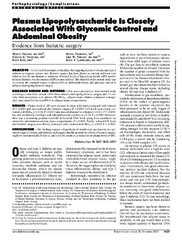 OBJECTIVE It is of vital importance to elucidate the triggering factors of obesity and type 2 diabetes to improve patient care. Bariatric surgery has been shown to prevent and even cure diabetes, but the mechanism is unknown. Elevated levels of lipopolysaccharide (LPS) predict incident diabetes, but the sources of LPS are not clarified. The objective of the current study was to evaluate the potential impact of plasma LPS on abdominal obesity and glycemic control in subjects undergoing bariatric surgery.

CONCLUSIONS Our findings support a hypothesis of translocated gut bacteria as a potential trigger of obesity and diabetes, and suggest that the antidiabetic effects of bariatric surgery might be mechanistically linked to, and even the result of, a reduction in plasma levels of LPS.