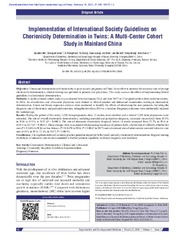 Methods: A multi‑centered cohort study was conducted between January 2014 and June 2017 in 12 hospitals without fetal medicine centers. In 2014, the obstetricians and ultrasound physicians were trained in clinical practice and ultrasound examination relating to chorionicity determination. Linear and binary regression analyses were conducted to identify the effects of introducing the new protocols, including the diagnosis rate of chorionicty and perinatal outcomes, taking the data from 2014 as a baseline. Pregnancy outcomes were additionally adjusted for maternal age.

Conclusions: The implementation of a clinical practice guideline improved both overall and early chorionicity determinations. Regular training workshops of antenatal care are recommended to further promote capability in clinical diagnosis and treatment.