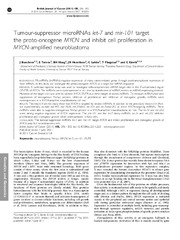 BACKGROUND: MicroRNAs (miRNAs) regulate expression of many cancer-related genes through posttranscriptional repression of their mRNAs. In this study we investigate the proto-oncogene MYCN as a target for miRNA regulation.

METHODS: A luciferase reporter assay was used to investigate software-predicted miRNA target sites in the 30 -untranslated region (30 UTR) of MYCN. The miRNAs were overexpressed in cell lines by transfection of miRNA mimics or miRNA-expressing plasmids. Mutation of the target sites was used to validate MYCN 30 UTR as a direct target of several miRNAs. To measure miRNA-mediated suppression of endogenous N-myc protein, inhibition of proliferation and inhibition of clonogenic growth, miRNAs were overexpressed in a MYCN-amplified neuroblastoma cell line.

RESULTS: The results from this study show that MYCN is targeted by several miRNAs. In addition to the previously shown mir-34a/c, we experimentally validate mir-449, mir-19a/b, mir-29a/b/c, mir-101 and let-7e/mir-202 as direct MYCN-targeting miRNAs. These miRNAs were able to suppress endogenous N-myc protein in a MYCN-amplified neuroblastoma cell line. The let-7e and mir-202 were strong negative regulators of MYCN expression. The mir-101 and the let-7 family miRNAs let-7e and mir-202 inhibited proliferation and clonogenic growth when overexpressed in Kelly cells.