Cortical bone structure of the proximal femur and incident fractures 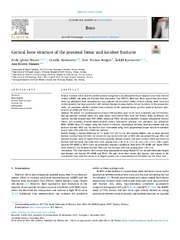 Purpose: Fracture risk is most frequently assessed using Dual X-ray absorptiometry to measure areal bone mineral density (aBMD) and using the Fracture Risk Assessment Tool (FRAX). However, these approaches have limitations and additional bone measurements may enhance the predictive ability of these existing tools. Increased cortical porosity has been associated with incident fracture in some studies, but not in others. In this prospective study, we examined whether cortical bone structure of the proximal femur predicts incident fractures independent of aBMD and FRAX score.

Results: During a median follow-up of 7.2 years, 114 (25.7%) of 443 women suffered one or more incident fracture. Cortical bone structure did not predict any incident fracture or MOF after adjustment for age, BMI, and previous fracture. Each SD higher total cortical porosity, thinner cortices, and lower cortical vBMD predicted hip fracture with increased risk of 46–62% (HRs ranging from 1.46 (1.01–2.11) to 1.62 (1.02–2.57)). After adjustment for FN aBMD or FRAX score no association remained significant. Both lower FN aBMD and higher FRAX score predicted any incident fracture, MOF and hip fractures with HRs ranging from 1.45–2.56.

Conclusions: This study showed that cortical bone measurements using clinical CT did not add substantial insight into fracture risk beyond FN aBMD and FRAX. We infer from these results that fracture risk related to the deteriorated bone structure seems to be largely captured by a measurement of FN aBMD and the FRAX tool.