Helicobacter pylori resistance to antibiotics before and after treatment: Incidence of eradication failure 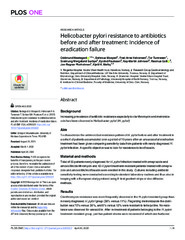 Increasing prevalence of antibiotic resistance especially to clarithromycin and metronidazole has been observed in Helicobacter pylori (H. pylori).

To characterize the antimicrobial resistance pattern of H. pylori before and after treatment in a cohort of patients accumulated over a period of 15 years after an unsuccessful eradication treatment had been given comparing sensitivity data from patients with newly diagnosed H. pylori infection. A specific objective was to look for resistance to levofloxacin.

Total of 50 patients newly diagnosed for H. pylori infection treated with omeprazole and amoxicillin/clarithromycin and 42 H pylori treatment-resistant patients treated with omeprazole and amoxicillin/levofloxacin were enrolled in this study. Cultures including antibiotic sensitivity testing were conducted according to standard laboratory routines and thus also in keeping with a European study protocol using E-test gradient strips or disc diffusion methods.

Clarithromycin resistance was more frequently observed in the H. pylori resistant group than in newly diagnosed H. pylori group (39% versus 11%). Regarding metronidazole the distribution was 70% versus 38%, and 8% versus 12% were resistant to tetracycline. No resistance was observed for amoxicillin. After re-treatment of patients belonging to the H. pylori treatment-resistant group, just two patient strains were recovered of which one harbored metronidazole resistance. In the group of newly diagnosed H. pylori, seven patients were culture positive by control after treatment. Two and three patient strains showing resistance to clarithromycin and metronidazole, respectively. None of the strains in our material was classified as resistant to amoxicillin and levofloxacin. Whereas 12% was resistant to tetracycline in the newly diagnosed before treatment.

Clarithromycin resistance was more frequent in the H. pylori treatment-resistant group than strains from patients with newly diagnosed H. pylori infection. No resistance was observed to amoxicillin and levofloxacin. In such cases Therefore levofloxacin may be used provided in vitro sensitivity testing confirms applicability.