A nationwide registry study on heart failure in Norway from 2008 to 2018: variations in lookback period affect incidence estimates 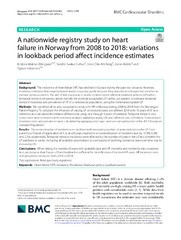 Background: The incidence of heart failure (HF) has declined in Europe during the past two decades. However, incidence estimates from registry-based studies may vary, partly because they depend on retrospective searches to exclude previous events. The aim of this study was to assess to what extent diferent lookback periods (LPs) afect temporal trends in incidence, and to identify the minimal acceptable LP. Further, we wanted to estimate temporal trends in incidence and prevalence of HF in a nationwide population, using the minimal acceptable LP.

Methods: We identifed all in- and out-patient contacts for HF in Norway during 2008 to 2018 from the Norwegian Patient Registry. To calculate the infuence of varying LP on incident cases, we defned 2018 with 10 years of LP as a reference and calculated the relative diference by using one through 9 years of lookback. Temporal trends in incidence rates were estimated with sensitivity analyses applying varying LPs and diferent case defnitions. Standardised incidence rates and prevalence were calculated by applying direct age- and sex-standardization to the 2013 European Standard Population.

Results: The overestimation of incident cases declined with increasing number of years included in the LP. Compared to a 10-year LP, application of 4, 6, and 8 years resulted in an overestimation of incident cases by 13.5%, 6.2% and 2.3%, respectively. Temporal trends in incidence were afected by the number of years in the LP and whether the LP was fxed or varied. Including all available data mislead to conclusions of declining incidence rates over time due to increasing LPs.

Conclusions: When taking the number of years with available data and HF mortality and morbidity into consideration, we propose that 6 years of fxed lookback is sufcient for identifcation of incident HF cases. HF incidence rates and prevalence increased from 2014 to 2018.