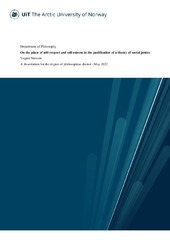 This dissertation discusses the place of self-respect, self-esteem, and related self-attitudes in the justification of a theory of distributive justice. It is broadly agreed that self-respect/self-esteem is a highly important good, and that it relies on a supportive social environment. Different authors within different traditions have taken up this idea to ground a wide variety of principles, policies, and ideals of social justice by arguing that these support the self-respect/self-esteem of the citizenry. The dissertation discusses this line of reasoning and argues two overall points, one negative and one positive. (1) Negatively, it is argued that several standard types of self-respect based arguments for distributive principles are problematic. For the two standard versions of the self-respect argument for the liberty principle fail. And considerations of self-respect do not offer meaningful guidance to the choice of basic principles within John Rawls’s widely influential framework of an original position, notwithstanding Rawls’s insistence to the contrary. (2) Positively, it is argued that considerations of self-respect and related self-attitudes still have an important role in the justification of distributive principles and policies, and that such considerations encompass more than what is commonly argued (at least in detail) or readily admitted. For we can give a similar and more modest version of the argument for the liberty principle based on a self-attitude I call “a sense of competence”. And at the very least Rawls, Axel Honneth and others that care about the social bases of self-esteem have good reasons to care about the levels of envy (which involves a diminished sense of self-worth) that different distributive principles and policies reliably generate.

Paper 2: Stensen, V. The Irrelevance of Self-Respect in the Original Position. (Manuscript).