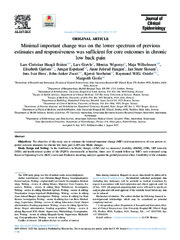 Objectives: The objective of this study was to estimate the minimal important change (MIC) and responsiveness of core patient reported outcome measures for chronic low back pain (LBP) and Modic changes.

Study Design and Setting: In the Antibiotics in Modic changes (AIM) trial we measured disability (RMDQ, ODI), LBP intensity (NRS) and health-related quality of life (EQ5D) electronically at baseline, three- and 12-month follow-up. MICs were estimated using Receiver Operating Curve (ROC) curve and Predictive modeling analyses against the global perceived effect. Credibility of the estimates was assessed by a standardized set of criteria. Responsiveness was assessed by a construct and criterion approach according to COSMIN guidelines.

Results: The MIC estimates of RMDQ, ODI and NRS scores varied between a 15e40% reduction, depending on including ‘‘slightly improved’’ in the definition of MIC or not. The MIC estimates for EQ5D were lower. The credibility of the estimates was moderate. For responsiveness, five out of six hypotheses were confirmed and AUC was O0.7 for all PROMs.

Conclusion: When evaluated in a clinical trial of patients with chronic LBP and Modic changes, MIC thresholds for all PROMs were on the lower spectrum of previous estimates, varying depending on the definition of MIC. Responsiveness was sufficient.