Adherence and persistence to pharmacotherapy in patients with heart failure: a nationwide cohort study, 2014–2020 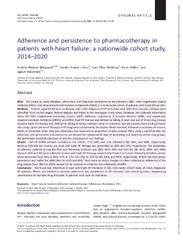 Methods - Patients aged 18–80 years in Norway with a first diagnosis of HF from 2014 until 2020 that survived ≥30 days were identified from the Norwegian Patient Registry and linked to the Norwegian Prescription Database. We collected information about BB, RASi [angiotensin-converting enzyme (ACE) inhibitors, angiotensin II receptor blockers (ARB), and angiotensin receptor-neprilysin inhibitors (ARNI)], and MRA. Dual HF therapy was defined as taking at least two out of three drug classes, whereas triple HF therapy was defined as taking all three. Initiation (time to initiation) and persistence (time to discontinuation using a grace period of 30 days) of HF drugs was calculated by the Kaplan–Meier method, followed to outcome of interest, death, or December 2020. One-year adherence was measured as proportion of days covered (PDC) using a cut-off at 80%. For adherence and persistence measurements, we allowed for maximum 60 days of stockpiling and switching within drug groups. We performed sensitivity analyses to test the robustness of our findings.

Results - Out of 54 899 patients included in the cohort, 75%, 69%, and 21% initiated a BB, RASi, and MRA, respectively, whereas 13% did not receive any. Dual and triple HF therapy was prescribed to 61% and 16%, respectively. The proportion of adherent patients during the first year following initiation was 83%, 81%, 84%, and 61% for BB, RASi, ARNI, and MRA, whereas 42% and 5% were adherent to dual and triple HF therapy, respectively. From 2 to 5 years following initiation, persistence decreased from 58% to 38%, 57% to 37%, and 31% to 15% for BB, RASi, and MRA, respectively. Within the RASi group, persistence was higher for ARNI than for ACEI and ARB. There were no major changes in either initiation or adherence of the drug classes from 2014 to 2019, except for an increase in initiation and adherence of MRA.

Conclusions - We found low adherence to dual and triple HF therapies in this nationwide cohort study of newly diagnosed HF patients. Efforts are needed to increase adherence and persistence to HF therapies into clinical practice, emphasizing maintenance of multiple drug therapies in patients with such an indication.