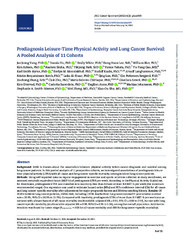 Methods: Using self-reported data on regular engagement in exercise and sports activities collected at study enrollment, we assessed metabolic equivalent hours (MET-h) of prediagnosis LTPA per week. According to the Physical Activity Guidelines for Americans, prediagnosis LTPA was classified into inactivity, less than 8.3 and at least 8.3 MET-h per week (the minimum recommended range). Cox regression was used to estimate hazard ratios (HRs) and 95% confidence interval (CIs) for all-cause and lung cancer–specific mortality after adjustment for major prognostic factors and lifetime smoking history.

Conclusions: Regular participation in LTPA that met or exceeded the minimum Physical Activity Guidelines was associated with reduced hazards of mortality among lung cancer patients, especially those with early stage cancer.