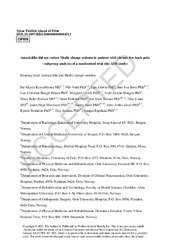 Objective. To assess the effect of amoxicillin versus placebo in reducing Modic change (MC) oedema in patients with chronic low back pain (LBP).

Methods. A total of 180 patients were randomised to receive 100 days of amoxicillin or placebo. MC oedema was assessed on MRI at baseline and one-year follow-up. Per-protocol analyses were conducted in subgroups with MC oedema on short tau inversion recovery (STIR) or T1/T2-weighted MRI at baseline. MC oedema reductions (yes/no) in STIR and T1/T2-series were analysed separately. The effect of amoxicillin in reducing MC oedema was analysed using logistic regression adjusted for prior disc surgery. To assess the effect of amoxicillin versus placebo within the group with the most abundant MC oedema on STIR at baseline (‘STIR3’ group), we added age, STIR3 (yes/no), and STIR3×treatment group (interaction term) as independent variables and compared the marginal means (probabilities of oedema reduction).

Conclusions. From baseline to one-year follow-up, amoxicillin did not reduce MC oedema compared with placebo.