The bridge-building role of political procedures : indigenous rights and citizenship rights within and across the borders of the nation-state 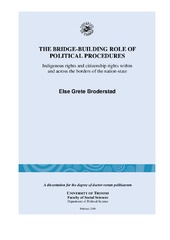 Abstract for chapter 3: The subject of chapter three is the treatment of the so-called Finnmark Act in the Norwegian Parliament (Storting) from 2003 to 2005. A distinct aspect of the process was the invitation from the Norwegian Parliament for the Finnmark County Council and the Saami Parliament to participate in consultations relating to the law, a process for which no provision is made in the parliamentary rules and regulations of the Norwegian Parliament and which is not undertaken in other contexts. The members of the Norwegian Parliament considered the consultations a constitutional innovation. The participants met for consultations four times and apparently achieved significant results. The meetings led to considerable changes in the bill proposed by the government, and it was passed into law with a clear parliamentary majority and also with support from the Finnmark County Council and the Saami Parliament. The consultations and the legal process meant in effect a confirmation of the status of the Saami as an indigenous people. This paper first analyzes the reasons for the use of consultations as it is embodied in international conventions (especially ILO Convention no. 169) before focusing on the implementation in the Norwegian Parliament. What was the background and how were consultations carried out and what implications did this have? The analysis is theoretically based on the idea of deliberative democracy which presupposes that the parties involved arrive at decisions through an exchange of views in the same manner that consultations in theory are supposed to work. This orientation has been an important part of the debate over the last two decades about the possibilities for democracy in modern society and in the discussion of whether it is possible to fruitfully study the actual exchange of arguments.Abstract for chapter 4: Chapter IV–Indigenous rights and limitations on the nation-state–focuses on how the role and status of the Saami are affected by the process of European integration. The challenges posed to nation-states by indigenous peoples regarding conceptions of citizenship and belonging raise not merely empirical questions but also conceptual ones. They pertain to the conceptual lenses we apply. Accordingly, clarifications are required, and here the liberal and communitarian conceptions of citizenship are addressed. The study of the states’ dealing with Saami claims and the Norwegian ILO-ratification versus the non-ratification of Finland and Sweden indicates that the state authorities have taken a different approach in strategies towards Saami rights claims. Accordingly, to a varying degree, the nation-states have consolidated the place of the indigenous in the citizenry.

Chapters number 2 and 4 of this thesis are not available in Munin due to publishers' restrictions:
2. Else Grete Broderstad (2001) ’Political Autonomy and Integration of Authority: The Understanding of Saami Self-Determination' International Journal on Minority and Group Rights, 8, p. 151-175.
4. Else Grete Broderstad (2000) ‘Indigenous rights and limitations on the nation-state’ In: Erik Oddvar Eriksen and John Erik Fossum,eds. Democracy in the European Union. Integration through deliberation? London, Routledge, p. 230-255.