Joint effect of myocardial infarction and obesity on the risk of venous thromboembolism: The Tromsø Study 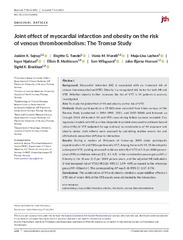 Background: Myocardial infarction (MI) is associated with an increased risk of venous thromboembolism (VTE). Obesity is a recognized risk factor for both MI and VTE. Whether obesity further increases the risk of VTE in MI patients is scarcely investigated.

Aim: To study the joint effect of MI and obesity on the risk of VTE.

Methods: Study participants (n = 29 410) were recruited from three surveys of the Tromsø Study (conducted in 1994–1995, 2001, and 2007–2008) and followed up through 2014. All incident MI and VTE cases during follow-up were recorded. Cox regression models with MI as a time-dependent variable were used to estimate hazard ratios (HRs) of VTE (adjusted for age and sex) by combinations of MI exposure and obesity status. Joint effects were assessed by calculating relative excess risk and attributable proportion (AP) due to interaction.

Conclusions: The combination of MI and obesity yielded a supra-additive effect on VTE risk of which 46% of the VTE events were attributed to the interaction.