Increased sinusoidal flow is not the primary stimulus to liver regeneration 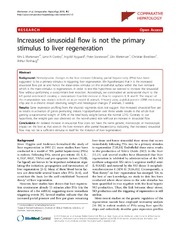 Background: Hemodynamic changes in the liver remnant following partial hepatectomy (PHx) have been suggested to be a primary stimulus in triggering liver regeneration. We hypothesized that it is the increased sinusoidal flow per se and hence the shear-stress stimulus on the endothelial surface within the liver remnant which is the main stimulus to regeneration. In order to test this hypothesis we wanted to increase the sinusoidal flow without performing a concomitant liver resection. Accordingly, we constructed an aorto-portal shunt to the left portal vein branch creating a standardized four-fold increase in flow to segments II, III and IV. The impact of this manipulation was studied in both an acute model (6 animals, 9 hours) using a global porcine cDNA microarray chip and in a chronic model observing weight and histological changes (7 animals, 3 weeks).
Results: Gene expression profiling from the shunted segments does not suggest that increased sinusoidal flow per se results in activation of genes promoting mitosis. Hyperperfusion over three weeks results in the whole liver gaining a supranormal weight of 3.9% of the total body weight (versus the normal 2.5%). Contrary to our hypothesis, the weight gain was observed on the non-shunted side without an increase in sinusoidal flow.
Conclusions: An isolated increase in sinusoidal flow does not have the same genetic, microscopic or macroscopic impact on the liver as that seen in the liver remnant after partial hepatectomy, indicating that increased sinusoidal flow may not be a sufficient stimulus in itself for the initiation of liver regeneration.

This article is part of Kim Erlend Mortensen's doctoral thesis, which is available in Munin at http://hdl.handle.net/10037/2893