Life or death. The social impact of paramedics and first responders in landmine-infested villages in northern Iraq 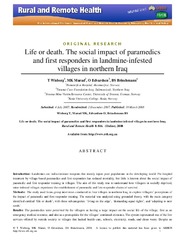 Introduction: Landmines are indiscriminate weapons that mainly injure poor populations in the developing world. Pre-hospital treatment by village-based paramedics and first responders has reduced mortality, but little is known about the social impact of paramedic and first responder training in villages. The aim of this study was to understand how villagers in socially deprived, mine-infested villages experience the establishment of paramedic and first responder chains of survival.
Methods: The study used focus-group interviews conducted in four villages in northern Iraq, to explore villagers’ perceptions of the impact of paramedic and first responder training. The material was analyzed using grounded theory, with the main category identified entitled ‘life or death’, with three subcategories: ‘living on the edge’, ‘demanding equal rights’, and ‘adapting to new needs’.
Results: The paramedics were perceived by the villagers as having a large impact on the social life of the village, first as an emergency medical resource, and also as a prerequisite for the villages’ continued existence. The system represented one of the few services offered by outside society to villages that lacked health care, schools, electricity, roads, and clean water. Despite an improved economic situation in the larger society, conditions in the villages had deteriorated. Although originally intended as an emergency care system for land mine victims, the system was adapted to include the role of a general medical resource in the villages. This adaptation was perceived as useful by the villagers, and necessary for their continued trust in the system. A prerequisite for this adaptation was that the program coordinator was a villager himself, and that the program deviated from its originally fixed time period. This flexibility depended on very close cooperation between expatriate and local program managers.
Conclusions: Our findings indicate that the paramedic system made a wider impact than just the provision of emergency health care. The program earned trust through a strong local anchor, and by adapting to the needs of the population served.

This paper is part of Torben Wisborg's doctoral thesis, which is available in Munin at http://hdl.handle.net/10037/2404