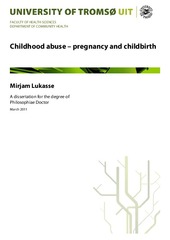 Background: Childhood abuse affects adult physical and psychological health. There is limited research on the effect of childhood abuse on pregnancy and childbirth. Studies usually focus on a single type of abuse, commonly sexual and/or physical abuse, few have considered emotional abuse. The results of studies on childhood abuse and mode of delivery are inconsistent. This might be due to methodological differences. No studies so far have focused on the relationship between childhood abuse and fear of childbirth, even though clinical practice and research suggest a correlation. Objectives: The first aim of our study was to estimate the prevalence of any childhood abuse, and for the sub-categories sexual, physical and emotional abuse, among unselected pregnant women in Norway. Secondly we assessed the association between childhood abuse and common complaints in pregnancy. Thirdly we investigated the relationship between a history of childhood abuse and mode of delivery. Finally we explored the relationship between a history of childhood abuse and fear of childbirth. Subjects and methods: Study I, II and IV use data from questionnaires from the Norwegian Mother and Child Cohort (MoBa) Study linked to data from the Norwegian Medical Birth Registry. Study III used the Norwegian data from the European Bidens study, including only data from questionnaires. Study I was a cross-sectional study which included 55,776 pregnant women. Study II was a cohort study of 26,923 primiparous women. Study III was a crosssectional study including 2,365 pregnant women. Study IV is a longitudinal study which followed 4,876 women, collecting data during their first pregnancy, at birth, 6 months after birth and again during the second pregnancy. Results: In our studies 18–24% of the women reported any childhood abuse, 5–11% emotional abuse, 11–16%, physical abuse, and 7–12% sexual abuse in childhood. Women reporting abuse in childhood were significantly more likely to report 7 or more common complaints in pregnancy. Primiparous women reporting a history of childhood abuse had an increased risk to give birth by caesarean section during labour. A history of childhood abuse was a significant risk factor for experiencing severe fear of childbirth among primiparous women in the cross-sectional Bidens study and among multiparous women in longitudinal MoBa study.