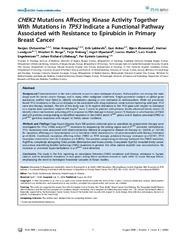 Background Chemoresistance is the main obstacle to cure in most malignant diseases. Anthracyclines are among the main drugs used for breast cancer therapy and in many other malignant conditions. Single parameter analysis or global gene expression profiles have failed to identify mechanisms causing in vivo resistance to anthracyclines. While we previously found TP53 mutations in the L2/L3 domains to be associated with drug resistance, some tumors harboring wild-type TP53 were also therapy resistant. The aim of this study was; 1) To explore alterations in the TP53 gene with respect to resistance to a regular dose epirubicin regimen (90 mg/m2 every 3 week) in patients with primary, locally advanced breast cancer; 2) Identify critical mechanisms activating p53 in response to DNA damage in breast cancer; 3) Evaluate in vitro function of Chk2 and p14 proteins corresponding to identified mutations in the CHEK2 and p14(ARF) genes; and 4) Explore potential CHEK2 or p14(ARF) germline mutations with respect to family cancer incidence.

Conclusion This study is the first reporting an association between CHEK2 mutations and therapy resistance in human cancers and to document mutations in two genes acting direct up / down-stream to each other to cause therapy failure, emphasizing the need to investigate functional cascades in future studies.