Out of mind - out of sight : studies on clinical and psychophysiological characteristics of dissociative identity disorder 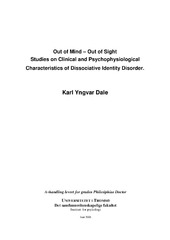 Dissociative identity disorder (DID; APA, 1994), previously labeled Multiple personality (APA, 1980) and Multiple Personality Disorder (APA, 1987), has good diagnostic validity (Gleaves, May, & Cardeña, 2001) and is supported by taxometric research, whereby two types of dissociation have been identified: Pathological dissociation, whose features are consistent with DID, and nonpathological dissociation (Waller, Putnam, & Carlson, 1996). On these grounds, we aimed to contribute to a further validation of the construct of DID by (1) testing to which extent DID may be separated from other dissociative disorders on a series of clinical and psychophysiological measures, and (2) exploring the characteristics of DID within the framework of Personal construct theory. 14 persons with DID were compared with persons with other dissociative disorders, and non‐clinical comparison participants with regard to severity of PTSD related features, dissociative functioning, hypnotizability (Paper I), and prepulse inhibition (PPI) of the acoustic startle eye‐blink reflex (Paper II). Persons with DID had reduced habituation of startle reflexes and increased PPI, compared to non‐DID participants. These data suggest the operation of an aberrant voluntary attentional processes in the face of unpleasant and threatening stimuli, and this may be a defining characteristic in DID. This finding supports the notion that DID is a separate clinical and nosological entity (Gleaves et al., 2001; Waller et al., 1996). Results also showed that persons with DID differed significantly from persons with other dissociative disorders with regard to the complexity and magnitude of dissociative symptomatology, and with regard to hypnotizability. These results are also indicative of DID being a separate clinical entity, qualitatively different from other dissociative disorders (Gleaves et al., 2001; Waller et al., 1996). As expected, histories of childhood sexual and physical assault were reported among persons with DID and persons with other dissociative disorders and both these groups attained high PTSD scores. Although the clinical groups did not differ significantly with regard to scores of current and lifetime PTSD, some differences were observable with regard to the type and occurrence of abuse, with, e.g., a higher percentage of the DID group having experienced sexual assault by a close relative during childhood compared to the group with other dissociative disorders. This is consistent with findings that DID is linked to the nature of the assault and to the relationship between the victim and the perpetrator (Boon & Drajer, 1993). In a design involving test technology developed within the framework of Personal construct theory (Kelly, 1955), 13 persons with DID were compared to persons with other clinical conditions and non‐diagnosed comparison participants with regard to cognitive complexity (Paper III). Contrary to expectations, results showed that displaying alternate personalities does not imply a more multidimensional level of thinking. However, persons with DID seemed to have a more advanced social skill in role thinking and role conceptualization, in comparison with non‐dissociative persons. The results have important implications for the identification, treatment, and understanding of DID.