Between constitutive absence and subversive presence : self and other in the Contemporary War Film. 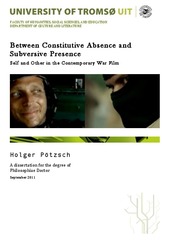 Through the combination of a discourse-theoretical framework and advances in cognitive film theory, this dissertation aims at conceptualizing the ways through which film and other audio-visual media impact on the spectator and on political discourse. In close readings of a variety of contemporary war films and games, I describe the formal representational conventions through which the genre frames the perception of self, other, and the nature of their conflict. I argue that war films and games establish, maintain, and reinforce epistemological barriers that render stability to a hegemonic discursive identity – the soldier-self – and that frame the respective opponent as ubiquitously absent – inaccessible, incomprehensible, yet potentially omnipresent as a deadly threat. Audience identification is systematically directed toward the soldier-self and allegiance is invited to only this side. Deployed across various audio-visual media epistemological barriers acquire the function of interpretative schemata that tacitly predispose audience engagements not only with diegetic, but also with potential or actual real world opponents. The ubiquitously absent enemy becomes a floating signifier in political discourse that various competing articulations struggle to fix in particular objectified configurations. I then proceed to show how liminality subverts epistemological barriers and reconstitutes them as inherently connective zones of contact and negotiation. With reference to close readings of war films that subtly challenge the conventions of the genre, I argue that border-crossing characters and shared locations enable a resurfacing of the identity and discourse of the previously confined other. This way liminality dislodges mutually exclusive war identities and brings into view nonviolent alternatives to a politics of polarity and exclusion.