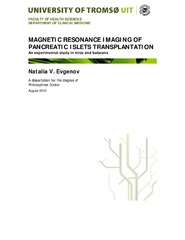 Transplanted insulin-producing cells can be safely monitored by magnetic resonance imaging Transplantation of insulin-producing cells can treat patients with diabetes. Unfortunately, the long-term effects of this treatment are poor due to non-survival of the majority of the transplanted cells. In our study, we found that magnetic resonance imaging (MRI) can be safely used to trace survival of the transplanted cells. The thesis “Magnetic resonance imaging of islets transplantation” has been submitted in application for the Philosophiea Doctor degree at the Faculty of health sciences University of Tromsø. Although progress of the insulin-producing cell transplantation has been substantial, it remains an experimental procedure. The possibility to observe the cells after transplantation can help to overcome the challenges that limit the procedure’s widespread use. MRI is a safe and powerful imaging technology that is commonly used for visualizing different body parts. The insulin-producing cells are very small, and in order to be seen on MR images, they need to be labeled with a contrast agent. The main objective of the study was to explore the possibility of using MRI for real-time monitoring of insulin-producing cells after transplantation. We also have developed and assessed a technique to combine these cells with an MRI contrast agent. We labeled insulin-producing cells by an iron-containing contrast agent to distinguish them from the surrounding tissue on the MR images. We found that iron-labeling did not alter the cell vitality and the insulin-producing function. The labeled cells were transplanted into the liver or kidneys of laboratory animals (mice and baboons). By using different animal models, we created various types of environments for the transplanted cells. We performed MRIs on the animals at several points in time. On MR images the labeled cells appeared as dark spots. After death, the labeled cells spilled their contents, including iron, into the surrounding tissue. Various defense cells then cleared the spilled material from the area making the labeled insulin-producing cells invisible on MR images. By counting the amount of dark spots on MR images, we were able to monitor cell survival following transplantation in different conditions and various points in time. We concluded that MRI could greatly assist clinical management of patients with diabetes following transplantation of insulin-producing cells. Natalia V. Evgenov, M.D, was born in Arkhangelsk, Russia in 1971 and graduated from the Northern State Medical University in 1995. Research interests of Dr. Evgenov include developing new therapeutic modalities for diabetes and in vivo imaging of transplanted pancreatic islets. Contact information: Natalia V. Evgenov, M.D. Athinoula A. Martinos Center for Biomedical Imaging Department of Radiology Massachusetts General Hospital Harvard Medical School Boston, Massachusetts, USA Phone: +1 978 239 9288 E-mail: natalia@nmr.mgh.harvard.edu