Norway on a High in the North : a discourse analysis of policy framing 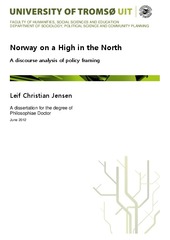 The objective of this thesis is essentially to understand better how the High North initiative has been framed and construed in official and public discourse in Norway. To this end, the dissertation consists of five articles which deal with different aspects of this initiative from thematically different angles, and different sources of data depending on whether public or official discourses are under scrutiny, but from the same theoretical and methodological perspective.An important concern in this thesis has been to explore and reveal the limits that determine which opinions, accounts of reality and future prospects are deemed ‘legitimate’ and possible to entertain. What is ‘selected’ to be included, and what excluded, given prevailing Norwegian conceptions of the High North? What is assumed as given and what is indexed as problematic? The point here is not necessarily what causes divisions and dissension. It might be more relevant to identify what is allowed to stand uncontested, unquestioned and taken as an indisputable premise for the ensuing discussion – and for political decision-making. A key point of departure for this project in particular and discourse analysis more generally is that discourses are involved in determining actual behaviour by narrowing the definition of what counts as acceptable actions and utterances in society at a given point in time. Against this background, discourses can shed light on political practice by defining the scope for action and which options are taken as politically feasible.