Prenatal exposure to DDT and other selected environmental contaminants and their predictors in malaria and non-malaria areas in coastal KwaZulu Natal, South Africa 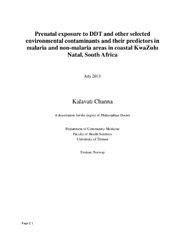 Prenatal exposure to environmental toxicants is of major concern, as foetal development is one of the most sensitive life stages for endogenous and exogenous insults. Permeability of the placenta allows not only for environmental contaminants, but also contaminants released from maternal body stores during pregnancy, to be transferred to the foetus. Most of the exposure assessments in pregnant women and birth outcome studies have been performed in developed industrialised countries, mainly in the northern hemisphere. There is a lack of such assessments from developing countries and countries that are in transition, therefore the study was initiated. In addition, the reintroduction of controlled indoor residual spraying (IRS) of DDT for malaria control in 2001 in malaria endemic regions in South Africa (SA), provided an opportunity to assess prenatal exposure and enhance the current understanding of DDT and other selected contaminants in malaria and non-malaria regions situated along the coast. This thesis evaluated the extent of concomitant exposure to selected organic compounds and mercury (Hg) in utero in three very distinctive rural study sites, namely, site 1 - a malaria endemic site; site 2 - a non-malaria site; and site 3 - an intermittent malaria site. In the malaria endemic site, as expected, elevated levels of DDT from IRS were found. In addition, substantial concentrations of Hg, γ-HCH and endosulfan were also detected. In the intermittent and non-malaria sites, the p,p'-DDE/p,p'-DDT ratios indicate recent on-going use of DDT, possibly illegal use, since DDT use is only allowed in designated areas. Furthermore, high levels of the now banned γ-HCH and endosulfan were also found in the intermittent malaria site, with lower levels in the malaria endemic site and non-malaria sites. Although Hg was detected in 100 % of maternal and cord blood samples analysed, it was found to be in lower concentrations than in some other countries. However, continuous low levels exposure to Hg may have the negative parallel neurotoxic effects for vulnerable groups such as the foetus, newborns and growing children. This study has confirmed that pregnant women in these study sites were exposed concurrently to a mixture of chemicals, many classified as endocrine disruptors, indicating the need for the implementation of policies that curtail the use of these chemicals.