Smoking and incidence and mortality of colorectal cancer 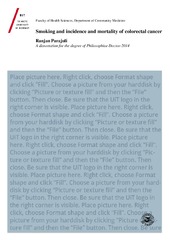