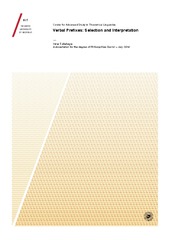 The striking polysemy of Russian verbal prefixes is a well known phenomenon. I show that there is a system to this chaos: prefix meaning is predictable from verbal structure and the prefixation mechanism is similar to that seen in English examples like outdo and overdo. In my analysis, lexico-syntactic structure plays an important role in explaining the selection and interpretation of prefixes. I uncover a central meaning that remains constant across different uses of a prefix, and describe the formal structural criteria for prefix interpretation in a given context. A uniform analysis of prefixation is developed, where a prefix relates an event to a scale measuring path, change or time. Both change of state and the development of an activity in time mirror a path in space with beginning, duration and a goal. E.g. a heating event can be seen as a journey along the temperature scale from a colder state to a warmer one. The choice of scale that a prefix combines with is a function of the syntactic position of the prefix, determined by the verbal structure. This approach is also fruitful for English, where I show that the acceptability of prefixation correlates with a scalarity-based classification of verbs.

Paper 4 of the thesis is not available in Munin:

The accepted manuscript version of paper 4 is available in Munin at http://hdl.handle.net/10037/6760