The role of general practitioners in the pre hospital setting, as experienced by emergency medicine technicians: a qualitative study 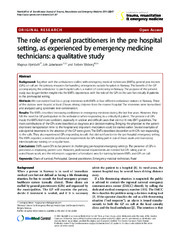 Background:Together with the ambulances staffed with emergency medical technicians (EMTs), general practitioners(GPs) on call are the primary resources for handling emergencies outside hospitals in Norway. The benefit of the GP accompanying the ambulance to pre-hospital calls is a matter of controversy in Norway. The purpose of the present study was to gain better insight into the EMT’s experiences with the role of the GPs in the care for critically ill patients in the pre-hospital setting.

Methods: We conducted four focus group interviews with EMTs at four different ambulance stations in Norway. Three of the stations were located at least 2 hours driving distance from the nearest hospital. The interviews were transcribed and analyzed using systematic text condensation.

Results:The EMTs described increasing confidence in emergency medicine during the last few years. However, they felt the need for GP participation in the ambulance when responding to a critically ill patient. The presence of GPs made the EMTs feel more confident, especially in unclear and difficult cases that did not fit into EMT guidelines. The main contributions of the GPs were described as diagnosis and decision-making. Bringing the physician to the patient shortened transportation time to the hospital and important medication could be started earlier. Several examples of sub-optimal treatment in the absence of the GP were given. The EMTs described discomfort with GPs not responding to the calls. They also experienced GPs responding to calls that did not function in the pre-hospital emergency setting. The EMTs reported a need for professional requirements for GPs taking part in out-of-hours work and mandatory interdisciplinary training on a regular basis.

Conclusions:EMTs want GPs to be present in challenging pre-hospital emergency settings. The presence of GPs is perceived as improving patient care. However, professional requirements are needed for GPs taking part in out-of-hours work, and the informants suggested a formalized area for training between EMTs and GPs on call.