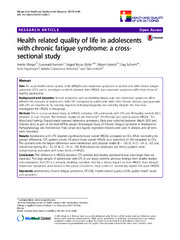 Aim: To study health related quality of life (HRQOL) and depressive symptoms in adolescents with chronic fatigue syndrome (CFS) and to investigate in which domains their HRQOL and depressive symptoms differ from those of healthy adolescents.
Background and objective: Several symptoms such as disabling fatigue, pain and depressive symptoms affect different life domains of adolescents with CFS. Compared to adolescents with other chronic diseases, young people with CFS are reported to be severely impaired, both physiologically and mentally. Despite this, few have investigated the HRQOL in this group.
Method: This is a cross-sectional study on HRQOL including 120 adolescents with CFS and 39 healthy controls (HC), between 12 and 18 years. The Pediatric Quality of Life Inventory™, 4.0 (PedsQL) was used to assess HRQOL. The Mood and Feelings Questionnaire assessed depressive symptoms. Data were collected between March 2010 and October 2012 as part of the NorCAPITAL project (Norwegian Study of Chronic Fatigue Syndrome in Adolescents: Pathophysiology and Intervention Trial). Linear and logistic regression models were used in analysis, and all tests were two-sided.
Results: Adolescents with CFS reported significantly lower overall HRQOL compared to HCs. When controlling for gender differences, CFS patients scored 44 points lower overall HRQOL on a scale from 0–100 compared to HCs. The domains with the largest differences were interference with physical health (B = −59, 95 % CI −54 to −65) and school functioning (B = −52, 95 % CI −45 to −58). Both depressive symptoms and being a patient were independently associated with lower levels of HRQOL
Conclusion: The difference in HRQOL between CFS patients and healthy adolescents was even larger than we expected. The large sample of adolescents with CFS in our study confirms previous findings from smaller studies, and emphasizes that CFS is a seriously disabling condition that has a strong impact on their HRQOL. Even though depressive symptoms were found in the group of patients, they could not statistically explain the poor HRQOL.